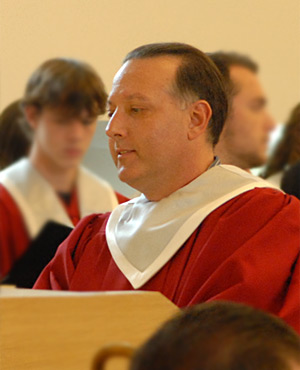 Galen is Director of Music at Saint Thomas More RC Church, Darien, the collaborative keyboardist for the Connecticut Chamber Choir, He is also a teacher for both organ and choral instructor at Sacred Heart University and the University of Bridgeport.

Galen received the B.Mus. in organ performance from the University of Arkansas and M.Mus. in organ performance from the University of Tennessee. As an organ recitalist, Galen most recently performed at the Church of the Transfiguration (New York City), First Congregational Church (Fairfield), the Cathedral of Saint Mary, San Francisco (CA), and in the More Music Concert Series, which he directs. As an accompanist, he has performed with numerous ensembles, including the United Chorale, Mendelssohn Choir of Connecticut, Stamford Chorale, Rockland County Chorale, the Lumina String Quartet, Sax In The City and for the Fairfield County Chorale Summer Sings.

Most recently, he served as assistant director /accompanist for the New Haven Chorale, regularly performing on the historic Newberry Memorial organ at Woolsey Hall (Yale).The diversity of his keyboard talents has led him to work with popular artists Joe Utterback, Jose Feliciano, Frank Patterson, Metropolitan Opera soprano Betty Jones and with Broadway tenors David Gaschen and Frank Mastrone. His choral conducting and accompanying performances have taken him to churches and concert halls in New York City, Philadelphia, Boston and Washington D.C., and abroad to England, Germany, Italy, the Netherlands, the Czech Republic, Hungary, Austria, Spain and Ireland. He has several times been a featured artist for National Pastoral Musicians Conventions, and most recently in the annual memorial events for Voices of September 11th in New York City.

Galen has served on the music faculty of Sacred Heart University (Fairfield), the University of Bridgeport, Norwalk Community College, Gateway Community College (New Haven), Fairfield University and the Hartt School of Music (Hartford), and continues to support both middle and high school music programs in concert and competitions throughout Fairfield County. Galen is a member of the American Guild of Organists, the American Choral Directors Association and is an FAA licensed private pilot.