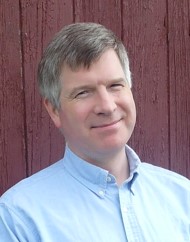 Samuel A. Schmitt is the Director of Sacred Music at Sts. Cyril and Methodius Church, Bridgeport. Sam has dedicated the better part of the past twenty-five years to making music for the church as an organist, conductor, composer, teacher, and choral singer.  Dr. Schmitt has served as music director and organist at churches in several states and was an assistant organist at the Cathedral of St. Matthew and st the National Shrine of the Immaculate Conception, both in Washington, DC.  Most recently he was Director of Sacred Music and Organist at the Cathedral Parish in Bridgeport, and assistant organist at St. Theresa Church in Trumbull.  He has given organ recitals at the National Shrine and National City Christian Church in Washington, and at All Saints Episcopal Church in Worcester, Massachusetts.  Dr. Schmitt’s chant-based responsorial psalms and Latin mass settings have been sung by choirs across the country.

At the Catholic University of America Schmitt studied the Solesmes method of chant with Dr. Theodore Marier, and earned a master’s degree in liturgical music with a concentration in organ performance, studying with Dr. Robert Grogan. He earned a doctorate in musicology at CUA for his research into the music and liturgical practice of persecuted Catholics in Elizabethan England.

Dr. Schmitt also serves as Executive Director of the Carl Schmitt Foundation in Wilton, Connecticut.  The Foundation seeks to further the legacy of his grandfather, the American painter Carl Schmitt, one of the founders of the Silvermine Guild of Artists.  He is the author of Carl Schmitt: The Vision of Beauty (Scepter Publishers) and Silvermine (Arcadia Publishing).