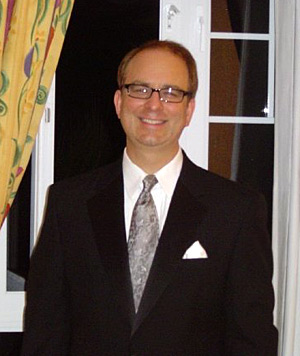 John is the Director of Music at St. Aloysius Roman Catholic Church in New Canaan. “Dr. John” as we refer to him, served many years at Sacred Heart University, as Director of Choral Programs, and, previously, the Director of the Academic Music Program. At SHU, Dr. John led international choir tours, expanded the choral program to five ensembles, taught a variety of courses, and oversaw the installation of ta Casavant pipe organ in the Chapel of the Holy Spirit. For the prior 20 years John served as the Minister of Music of the historic United Congregational Church in Bridgeport.

John completed the Doctor of Musical Arts and Master of Music degrees from the Manhattan School of Music in New York City where he was awarded the John Cerevolo prize in performance. John has performed recitals and concerts in both Europe and America, including solo organ recitals at St. Patrick’s Cathedral in New York City and at Princeton University. In February, 2009, he performed at Cathedrals in Barcelona, Madrid and Acala de Henares, Spain. He has been featured as an organist and recitalist at conventions of the National Association of Pastoral Musicians, and recitalist and accompanist with various choirs on tour, including St. Stephen’s Cathedral and the City Hall in Vienna, Austria, St. Peter’s Basilica, the Church of the Twelve Apostles in Rome, and Galway Cathedral in Ireland among others.

Locally John has accompanied the Bridgeport Diocesan Children’s Choir as they sang in that city’s Harbor Yard Arena celebrating the 50 year Diocesan anniversary, and was the organist and accompanist for the official diocesan rededication mass of the Bridgeport Diocese’s St. Augustine Cathedral. He performed with the Fairfield County Children’s Choir on their recent Gospel CD recording entitled This Is The Day. John, along with Frank Martignetti, Co-Chairs the highly successful Pipe Screams Halloween Concert held each year, that features many of our gifted Greater Bridgeport AGO chapter musicians and university choirs, that take part in an extravaganza of musical style performances, and that serves as a major fund raiser for the chapter’s Dr. M. Louise Miller – Paul E. Knox Scholarship award for college-bound students studying organ performance. He is former Dean of the Greater Bridgeport Chapter, on its Board, and one of the former judges for the scholarship fund.

As a composer, John’s children’s choir anthem, “Halle, Hallelujah” is published by the Chorister’s Guild, and was one of the selections sung during the procession at the Papal Mass celebrated by Pope Benedict XVI in Nationals Park in Washington, D.C. in April, 2008. His anthem, “Honor, Glory” was commissioned by the Connecticut Chapter of the Chorister’s Guild, which performed it at their tenth anniversary Festival of Choirs.