Many of our Greater Bridgeport AGO Members are accompanists, singers, conductors in area choral ensembles or instructors. We enjoy opportunities to create programs where we perform together with the Greater Bridgeport Symphony, annual events like Pipescreams, Community Choral Festivals or special events.

Feel free to contact an AGO member in any of the are choral ensembles to learn more. 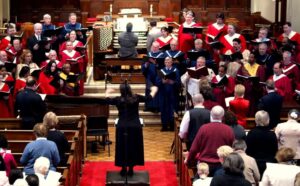 The Connecticut Chamber Choir is an auditioned ensemble of professional and dedicated avocational musicians from throughout the state of Connecticut. CCC has established itself as one of the region’s premier vocal ensembles through bi-annual performances of significant choral repertoire, spanning the sixteenth through the 21st centuries. Since its inception, the Connecticut Chamber Choir has dedicated itself to a tradition of excellence through inspired performance.

The Fairfield County Children’s Choir is a community-based choral program made up of 300 children in grades four through twelve from communities in and around Fairfield County, Connecticut. The FCCC was founded in 1995 to provide children the opportunity to participate in a musical experience which is challenging, rewarding and enjoyable. The FCCC program provides instruction in vocal technique, choral technique, music literacy and the appreciation of music through the practice and performance of great choral repertoire.

The Fairfield County Chorale consists of over 100 auditioned singers, representing a broad range of ages and musical backgrounds.  The repertoire ranges from the great classics to commissioned works and world premieres.  The Chorale has performed at such prestigious venues as Lincoln Center, Carnegie Hall and the Kennedy Center.  Its season consists of three concerts performed at the Norwalk Concert Hall, each with professional instrumentalists and soloists.

The Mendelssohn Choir of Connecticut (MCC) has performed some of the world’s greatest choral masterpieces in artistically unique and innovative performances that have earned it a reputation as one of the pre-eminent choral ensembles in New England. The Choir’s versatile programming mines an extensive repertoire that embraces musical works of all periods and genres from classical to contemporary, opera to pop. To this end, the Choir excels in fulfilling its mission to develop and promote an appreciation of choral music and to educate its members and the general public in the musical arts.

Anne Maria will be a senior at Eastman School of Music and will complete a Bachelors in Organ Performance and Music Theory.