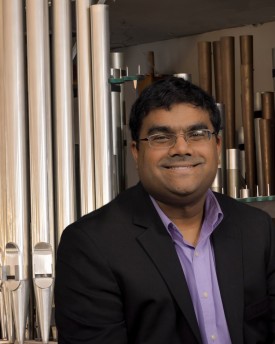 Daniel Brownell is the Director of Music Ministry at First Presbyterian Church of York, York, Pennsylvania. Daniel was most recently the Minister of Music for First United Church of Christ, Milford where he was responsible for invigorating all aspects of the music program. Daniel continues to remotely support the chapter as Sub-Dean.

A native of Hamden, CT, Daniel Brownell grew up in the UCC and has made music his vocation since the early days of youth. He holds a Bachelor of Music degree in Music Education (cum laude) from Ithaca College, where he concentrated in Organ Performance/Church Music Studies and also completed significant major study in the areas of music theory and composition. At Ithaca, he was an avid performer and became well-versed on many instruments including keyboards, woodwinds and percussion. He also holds a Master of Music Education degree from the Hartt School of Music where he also majored in Wind Conducting.

He has years of professional experience as a church musician, conductor, teacher and performer. Before Milford, Dan was the Director of Music at the Terryville Congregational Church for 4 years and before that he held a number positions while a student at Ithaca. Additionally, he has taught music in the public and private schools of Connecticut for several years and has extensive performing experience with groups in the area and as a solo recitalist. He brings a diverse music, performance and professional background to First Church and is passionate about connecting music and worship together. In his spare time, he enjoys composing music, taking long quiet hikes in the woods and spending time outside and spending time with his wife, Amy.

At First Church Dan directed the Junior, Youth and Adult Choirs as well as the Pilgrim Chorale and Meetinghouse Ringers (Handbells). He conducted the Meetinghouse Chorale and supported other music ensembles at the church including the Guitar group, Folk Rock group, Jazz Band and others. He was responsible for coordinating music with the other members of the staff, and planning for the long-term needs of the music program including how its role grows within the church community.