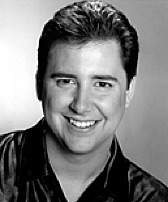 David Harris is a noted piano recording artist , entertainer, vocalist, and church musician. David has wowed local audiences for the past 10 years accompanying Silent Films at the mighty United Congregational Church 4/81 Austin pipe organ, and with his masterful piano and singing skills for the very successful Annual Greater Bridgeport AGO Pipescreams Concerts.

David is Director of Music at St. Thomas Acquinas RC Church, Fairfield. He is a consummate musician with a highly varied and diverse background. David demonstrated an interest in music at a very young age. By the age of 2, he began playing the piano and took up lessons shortly thereafter. At the age of 18, David moved to Wichita, Kansas where he received degrees in Piano Performance and Piano Pedagogy from Wichita State University.

While in Wichita, David quickly established himself as a society pianist and served as the resident music director and house pianist for many respected establishments, including the Crown Uptown Professional Dinner Theatre, and the Empire House Restaurant and Theater, where he served as music director for numerous musicals. Upon moving to the East Coast he served as music director and pianist for Unity Church of Sussex County in Lafayette, New Jersey, organist and choirmaster at St. Timothy’s Episcopal Church in Fairfield, Connecticut, and most recently Director of Music at St. Thomas Aquinas Church.

David has also served as pianist for three Off-Broadway musical productions at the York Theatre Company in New York City, including Taking A Chance On Love, Postcards On Parade, and The Grass Harp. Moreover, David has worked as arranger and orchestrator for many organizations, including the prestigious Rodgers & Hammerstein Foundation in New York City.

In addition to local theatre projects David is often seen performing at private parties, restaurants, piano bars and cabarets in the greater New York City and Connecticut area. David performs and records albums regularly as the Pianist of the Piano / Theatre Organ “Dynamic Duo” of David Harris and Jelani Eddington.