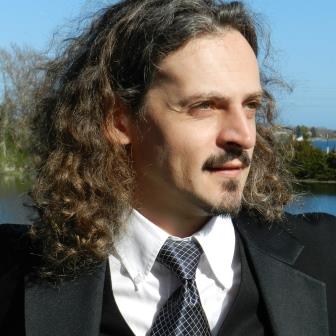 Church and/or Role
Performing for the Choirs of Heaven

Aymeric Dupré la Tour died suddenly in an automobile accident. He was a faithful supporter of the Greater Bridgeport AGO chapter performing regularly at our annual Pipescreams and other chapter events. We will miss his passion for performing, improvisation and love for life. You can listen to a number of his recordings on our chapter YouTube channel.

Aymeric was the organist at Saint Theresa RC Church, Trumbull at the time of his passing. He was a well-rounded keyboardist with praiseworthy accomplishments in solo performance, ensemble work, and accompanying on harpsichord, organ, and piano.

An award-winning musician, Dr. Dupré la Tour began his training at the Conservatoire National de Région of Lyon, France, his native town. He performed throughout his country as well as in the United States, Canada, and South America.  While at the Oberlin Conservatory of Music, he earned an Artist Diploma in Organ Performance and a Master of Music in Historical Performance.  He received the Doctor of Musical Arts degree from The Juilliard School.  His dissertation, “New Words for the Music of Louis Marchand,” highlights the diverse talents of this lesser-known Baroque organist, harpsichordist and vocal composer.

In addition to his church position, Dr. Dupré la Tour was the Assistant Artistic Director and Accompanist of the Mystic River Chorale in Mystic, CT. He was also the harpsichordist at Zuckermann Harpsichord International in Stonington, CT, where he regulated and voiced both new and restored harpsichords. He was a faculty vocal coach for the Ensign-Darling Vocal Fellowship at the Bushnell Center for the Performing Arts in Hartford and accompanist for the Student Education Outreach Program of the Salt Marsh Opera. He performed organ and harpsichord recitals and lectures, collaborated with Jurate Svedaite of the Connecticut Lyric Opera, and had recently formed a French horn and organ duo with Elizabeth Fleming Martignetti.

Accolades had followed Dr. Dupré la Tour from the beginning of his performance career. The reviewer of an early concert in Lyon with his sister on recorder noted that they played “with extraordinary intensity and sensitive virtuosity.”  These qualities continued to characterize both his ensemble and solo performances.  Known for his “spot on” precision and “prismatic detail” in accompanying, Dr. Dupré la Tour had played with the String Orchestra of New York on harpsichord, the Oberlin Symphony Orchestra on organ, and accompanied a critically-acclaimed recital at the Cleveland Museum of Art’s Musart Matinee series on harpsichord and piano.  He also performed on the celesta in John Luther Adams’ In the White Silence, now a New World Records CD.