Trinity Episcopal Church has had a long history of illustrious choirmasters and organists as well as a history of having fine instruments for them to play to demonstrate their considerable skills, and an acoustically rich sanctuary for performances as well as church services. The church has two pipe organs that can be played separately, or together.

The gallery pipe organ at Trinity Church is built according to classic principles that are widely accepted as the most reliable functionally and the most satisfying artistically. The playing action of the organ is direct mechanical (tracker). This system responds precisely to the organist’s fingers and gives him the closest possible control over the sounding of the pipes. The only electrical component is the motor driving the blower that supplies wind for the organ. The Wilhelm organ is an uncompromised organ for the 17th and 18th century organ literature, and the organ represents a major contribution to the tracker organ movement that was taking place in the 60s and 70s.

The organ consists of four divisions— the Hauptwerk, the Brustwerk, the Rückpositif and the Pedal. The Hauptwerk, or great organ, is located in the center of the organ case at the top. The Brustwerk, or Swell organ, is directly in front of the organist, on the gallery rail. The pipes of the Pedal organ can be seen in the two outer towers of the organ. There are 35 stops or different voices, controlled by individual drawbacks placed on both sides of the three manuals or keyboards; altogether there are a total of 2,362 pipes.

The specifications for the Wilhelm organ can be found here.

The tracker pipe organ can be played by the Chancel pipe organ console using a unique “temporary” set of actuate solenoids that literally depress the keys and pull the stops of the Wilhelm track organs three manuals plus pedals. When this unit is removed from the Wilhelm console it can be played as its original tracker console. 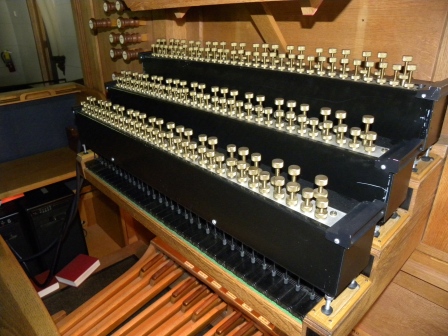 Various upgrades were completed to the church’s 1946 M.P. Moeller 24-rank Chancel pipe organ. With final upgrade in 1999, a new 3 manual console was added to play the remaining 12-ranks of the Moeller pipe-organ, the total 35-stops of the Wilhelm tracker Gallery pipe organ, and additional digital pipe stops. 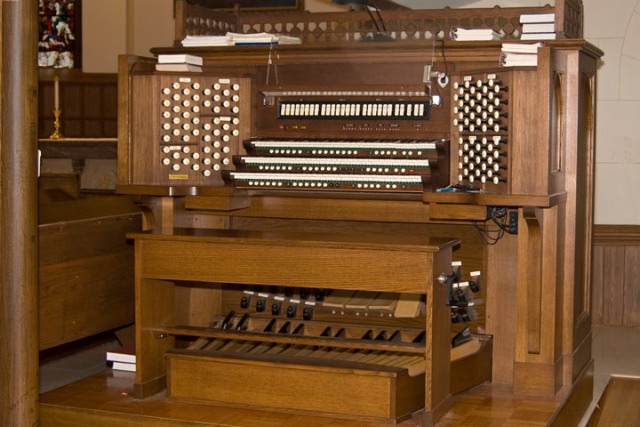 More about this interesting history of organ building at Trinity can be found at the church website.