Built in 1832, Saugatuck Congregational Church, just a short walk from the historic bridge crossing the Saugatuck River in the town center, is one of the oldest surviving structures. In November 2011, parts of the complex were gutted by a devastating fire. Although the sanctuary could be saved, there was heavy damage by soot and water. Parts of the roof over the organ chamber collapsed, and the existing organ built in 1963 was flooded.

Soon after the fire, it became clear that a new instrument had to be planned for the restored sanctuary, as the damage caused by the incoming water and the collapse of the roof rendered any repair work unfeasible. 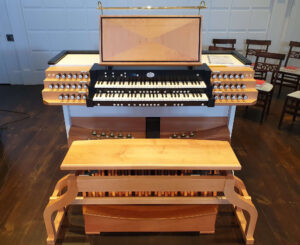 The result is a two-manual organ with mechanical action for Hauptwerk and Schwellwerk with 15 stops on slider chests. This soundpool is extended by three ranks of pipes (Stopped Wood 16’/8′, Open Wood 8’/4’/2′ and wooden Basson 16’/8’/4′), which are available in the Hauptwerk and in the Pedal. The straight-lined organ facade blends harmoniously into the elegantly restrained New England architecture of the church building. According to the Calvinist doctrine, the worship space is free of pictorial representations. 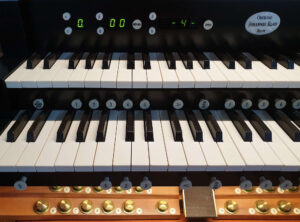