Built in 1884, the Thomaston Opera House (operated by the Landmark Community Theatre) serves as a cultural and educational center for the Town of Thomaston and its surrounding communities. Once inside one cannot help but admire the beautiful craftsmanship found throughout the auditorium. These are not the only attributes of the Thomaston Opera House though. Many of its recent accolades are for the community and regional-based theatre presented throughout the year.

Part of enjoying a special evening at the Thomaston Opera House is listening to House Organist, Juan Cardona Jr, play a pre-show concert for the audience prior to the stage show on the Marr & Colton three-manual, 15-rank theatre pipe organ. Juan makes sure he blends a mix of music from the highlights both the golden era of the silent films with more popular Broadway tunes, all using the high-wind pressure pipe ranks and orchestra instruments pneumatically (and for the piano, digitally attached) controlled at the console.

The Connecticut Valley Theatre Organ Society (CVTOS), a member chapter of the American Theatre Organ Society (ATOS), maintains this instrument, as well as an Austin Theatre Pipe Organ currently undergoing a console rebuild that is housed at the Shelton High School. A number of fine AGO Concert Organists also are Pops Theatre Organists. CVTOS holds Pops Concerts usually 2 times a year at its venues at the Thomaston Opera House and at the Shelton High School, in Shelton, CT. 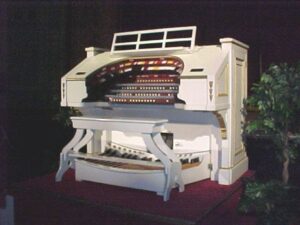 The Greater Bridgeport AGO Chapter is pleased to have an association with CVTOS and has used the Thomaston theatre pipe organ for the 2010 Pipe Organ Encounter program.

AGO members can contact John Polo if they would like to visit and play the Thomaston Opera House Marr & Colton pipe organ. Click here for the  Marr & Colton stoplist.