Thank you everyone that made this a very special event.

Enjoy the photos and the program from the event and the CT Post article on the restored organ and Katelyn Emerson’s concert by clicking on the respective links. 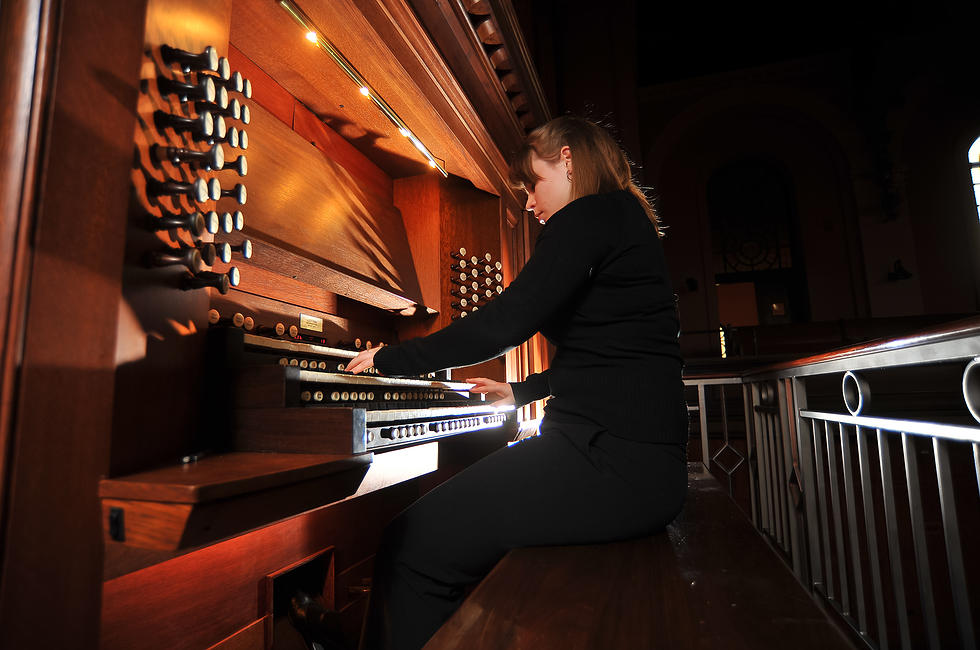 Join us for this very special program, Sunday, June 8, 2014, 4:00 PM, Cathedral of Saint Augustine, Bridgeport, when Katelyn Emerson and chapter members play the recently restored 1979 M.P. Moeller – 2013 A. Thompson-Allen III/47 rank pipe organ in this 750-seat, gothic and resonant house of worship, the cathedral for the Diocese of Bridgeport.

In addition to Katelyn illustrating her virtousity on this instrument, other Greater Bridgeport AGO members and invited guests will play the organ in a program that includes piano, soloists, congregation, and other instruments, so the public has the opportunity to hear this organ in a very wide and diverse palette of music styles by noted area organists. Prepared to be wowed!

The concert is open to the public. The annual chapter dinner and meeting will take place after the recital in the Cathedral rectory. Guests are welcome. Cost $25 per person for the catered dinner. RSVP for dinner reservations to Carole Fanslow, by June 1, 2014.

About Our Scholarship Winner

Katelyn Emerson, from York, ME, just completed her third year in the organ studio of James David Christie at Oberlin Conservatory in Oberlin, OH where she pursues bachelor’s degrees in both organ performance and French with minors in music history and historical performance, with a concentration in fortepiano. Katelyn began her organ studies in 2005 through a scholarship of the Young Organist’s Collaborative in Portsmouth, NH, and, since then, has performed throughout the United States. She has studied with Marie-Louise Langlais, widow of composer Jean Langlais, Olivier Latry, organiste titulaire of the Notre Dame Cathedral in Paris, Ray Cornils, municipal organist of Portland, ME, and Dr. Abbey Halberg-Siegfried, organist of St. John’s Episcopal Church in Portsmouth, NH. Katelyn has studied improvisation with Balint Karosi and Marie-Louise Langlais. She also studies fortepiano with David Breitman as well as harpsichord and continuo with Webb Wiggins.

Katelyn was one of three winners of the North American round of the VIII Mika√É¬´l Tariverdiev International Organ Competition that took place in April 2013 at the University of Kansas in Lawrence. She will continue on to compete in the second round of three in Kaliningrad, Russia in September 2013. Winner of the 2011 Region V (Kentucky, Illinois, Indiana, Michigan, and Ohio) Quimby/Regional Competition for Young Organists, Katelyn performed as a “Rising Star” at the American Guild of Organists’ (AGO) National Convention in Nashville summer 2012. She also won first place in the 2010 L. Cameron Johnson Memorial Competition for High School Organists.

Katelyn attended McGill’s 2009 and 2011 Summer Organ Academy where she studied French Romantic music, Improvisation, and French Classical music with Michel Bouvard, Sietze de Vries, and John Grew, respectively. In 2011, Katelyn was honored with a scholarship to attend the Summer Institute for French Organ Studies in Épernay and Poitiers, France, where she performed on organs of the French Classical and Romantic styles.

Katelyn is the music director of St. Paul Lutheran Church in Amherst, OH where she leads worship through the organ, piano, and directing the adult and bell choirs. She is the 2013 Sacred Music Intern at the Church of the Advent in Boston where she assists Mark Dwyer and Ross Wood in service playing and choral conducting. Katelyn was also the 2012 Oberlin Sacred Music Intern at Brick Presbyterian Church in New York City, studying with Keith T√É¬≥th, and she will substitute for Mr. T√É¬≥th at the Brick Church in July of 2013.

Jeff Wood, our M. Louise Miller Scholarship Chair had these comments regarding Katelyn’s choice as winner. “This year the scholarship judges had an exceptionally group of applicants and we thank each of them for their submissions to our competition. It is wonderful to see this level of achievement in young organists. Katelyn stood out for her musicality, elegance in performance, and several of the judges independently used the word “breathtaking” in her performance of a Tournemire piece. The judges were impressed with Katelyn’s drive, keeping up a busy performance and competition schedule all while pursuing a double degree. We wish Katelyn a successful career in the organ and are looking forward to this upcoming concert on magnificent Cathedral of Saint Augustine M.P. Moeller pipe organ.”