We are thrilled to have GBAGO scholarship winners Colin MacKnight (Julliard Doctorate student) and Alden Wright (Eastman under grad student) join us for this wonderful year-end social gathering at the beautiful Chapel of the Holy Spirit, Sacred Heart University, Fairfield - RSVP for scrumptious catered dinner to Carole Fanslow fanslow@juno.com by Monday, May 29.

Join us for a very special evening. We are thrilled to have 2 of the M. Louise Miller – Paul E. Knox Scholarship Competition Winners – Colin MacKnight and Alden Wright join our annual social time and catered dinner for a short recital program on the Chapel of the Holy Spirit Casavant freres III/23 rank pipe organ.

The evening starts at 6:00 PM with a chance to coast into summer with fellow chapter members and their guests with wine and appetizers in the gallery of the Egerton Performing Arts Center. A scrumptous catered dinner and dessert follows. The cost is $20 per person. RSVP to Carole Fanslow, fanslow@juno.com before Monday, May 29. Payment can be made by check to Greater Bridgeport AGO, or paid online at the website www.greaterbridgeportago.org.

The recital continues directly after dinner and dessert (8:00 PM) in the beautiful Chapel of the Holy Spirit. The recital is open to the public. 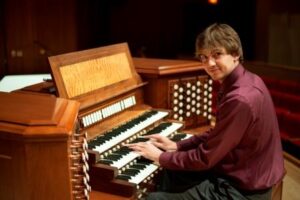 Colin MacKnight is a C.V. Starr Doctoral Fellow at The Juilliard School where he also received his Bachelor’s and Master’s degrees. He studies with Paul Jacobs, Grammy award winner and chair of the organ department.

Colin serves as Assistant Organist at New York City’s Church of the Resurrection under music director David Enlow. Among other duties, he shares responsibilities for accompanying and conducting the professional choir which performs over 50 choral mass settings each year. 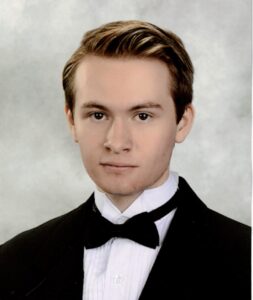 Alden Wright will be a sophmore at The Eastman School of Music in the fall, pursuing a Bachelor of Music in the studio of Nathan Laube. He is a native of Salisbury, North Carolina, where he studied organ with Dr. Phillip Burgess from 2012 – 2016 and piano with Diane Freeman from 2008 – 2012.

Alden was awarded first place in the 2014 Columbia, SC AGO Young Organist Competition and the 2016 University of North Carolina School of the Arts Organ Competition, as well as second in the Washington, DC AGO Franciscan Monastery Scholarship Competition in 2015. Alden has performed in many student and solo recitals throughout the country, as well as many masterclasses and summer organ programs. He was awarded the Robert and Ann Stigall Scholarship, sponsored by the Charlotte Chapter of the American Guild of Organists from 2013-2015, as well as the Pogorzelski-Yankee Memorial Scholarship for undergraduate studies.Alden served as music director and organist at Milford Hills United Methodist Church in Salisbury from January 2015 through June 2016.