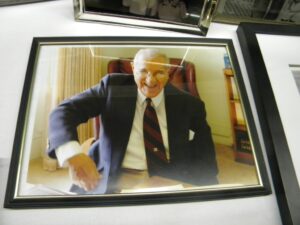 On January 19, 2013, members of the Greater Bridgeport Symphony, the United Congregational Church Chancel Choir, the Mendelssohn Choir, the Connecticut Chamber Choir, the Greater Bridgeport American Guild of Organists, and soloists from throughout the area, joined forces for a musical celebration of life that truly fit our dear friend Bob. The celebration of life service was held at the historic United Congregational Congregation Church, Bridgeport, Bob’s family’s church for since it was built in 1926! Special thanks to the leaders of each of these groups, Dr. John Michniewicz (organist/conductor), Galen Tate (organist/conductor), Traci Galla (conductor), Beverly Blanchard (soloist), Rev. Sara D. Smith, Esq (Pastor), John Polo (event organizer), and everyone that participated as singer or working behind the scenes.

It is not often that we have the opportunity to bring together such a powerhouse of musical talent.

The Greater Bridgeport Symphony has established a Memorial Fund to honor his legacy of helping all of us. Donations always welcome.

Please enjoy a few of the special pieces performed at the service.

He, watching over Israel – from Elijah, Felix Mendelssohn

How Lovely is Thy Dwelling Place – from A German Requiem, Johannes Brahms

Click the links for other multi-media of the celebration event – Participant Photos, CT Post Article or Full Service Audio .

Gentleman, lawyer and community pillar Bob T., as he was fondly known, will continue to be remembered as the smiling face of the Greater Bridgeport Symphony, an organization that he championed for much of his adult life. He had worked tirelessly since the 1970s on the orchestra’s behalf, including as president and chairman of the board of trustees, to create goodwill and a sense of community among musicians, staff, board members, audiences and Maestro Gustav Meier, whom he loved “like a brother.”

A gregarious showman, Bob adored greeting GBS patrons at holiday concerts in his beloved Santa suit. He also portrayed Santa for 54 consecutive years for his other passion: Goodwill of Western & Northern Connecticut, a branch that Bob helped to incorporate in 1951. Above all, Bob’s life is celebrated for his kindness, thoughtfulness, warmth and wisdom. He was the most genuine of souls, the “real deal” and our dear, dear friend.

(Shared with the GBS subscribers and concertgoers March 16, 2013)