Polish up that piece of music you would like to share with your colleagues on the recently restored (2012) First Congregational Church, Norwalk, CT III/52-rank Austin pipe organ, followed by wine/cheese social time and a scrumptious dinner with colleagues. $25/person. - recital and dinner. RSVP June 8 for dinner.

Coast in to summer with a chance to perform a favorite piece of music with your colleagues followed by social time and a wonderful annual dinner.

The place is First Church Congregational of Norwalk, Sunday, June 12, 2016, 4:00 PM. Flora Major is our host. Performers and audience will enjoy the restored (2012) III/52-rank pipe organ with new console; work completed by A. Thompson-Allen .

RSVP for dinner reservations to Carole Fanslow, by June 8 , 2016.

Flora Major, Director of Music at First Church Congregational Norwalk (at the corner of Park & Lewis Street, Norwalk, on the Norwalk Green), can be contacted to schedule rehearsal time at the church. Click here for directions.

First Congregational Church in Norwalk was established in 1652, making it one of America’s oldest churches. In 1917 the church suffered a devastating fire that destroyed the previous meetinghouse, leaving only the parish house standing. When the present building was erected, it was furnished with an organ built by the Estey Organ Company of Brattleboro, Vermont. After the Second World War the church welcomed Joseph F. McFarland (1922-2008) as its organist-choirmaster, a position he held for the next fifty-six years. Shortly after his arrival, First Church replaced the Estey organ’s original console with one by the M. P. M√É¬∂ller Organ Company.

After some seventy years of service, the Estey organ was worn out and in need of extensive repairs. In 1990 the people of First Church decided instead to replace the organ with a large new instrument built by the Austin Organ Company of Hartford. Austin Organs were then, and continue now, to be known for building quality instruments that serve reliably for many decades. Indeed, some Austin organs have been carrying on quite nicely for over 100
years!

Organ builders consider their instruments to be works of art and assign them opus numbers accordingly. The Austin organ for First Church is their Opus 2727, and may be described as a three-manual, five-division instrument having a total of fifty-two speaking stops and 3,248 pipes, ranging in size from more than eighteen feet long to smaller than a common pencil. Although a very few sets of pipes were reused from the Estey organ, and the M√É¬∂ller console was retained to save expense, Opus 2727 was essentially a completely new instrument.

In 2010, with the loving help of Joe Dzeda and the A. Thompson Allen Company, the now unreliable M√É¬∂ller console was replaced by an Austin console and the organ rededicated to Joe’s memory, most recently April 15th, 2012 at a recital played by Walden Moore. Its installation fully compliments Opus 2727 and, in a sense, completes the instrument. There is a certain sense of satisfaction in seeing the Austin organ played by an Austin console after twenty-one years. 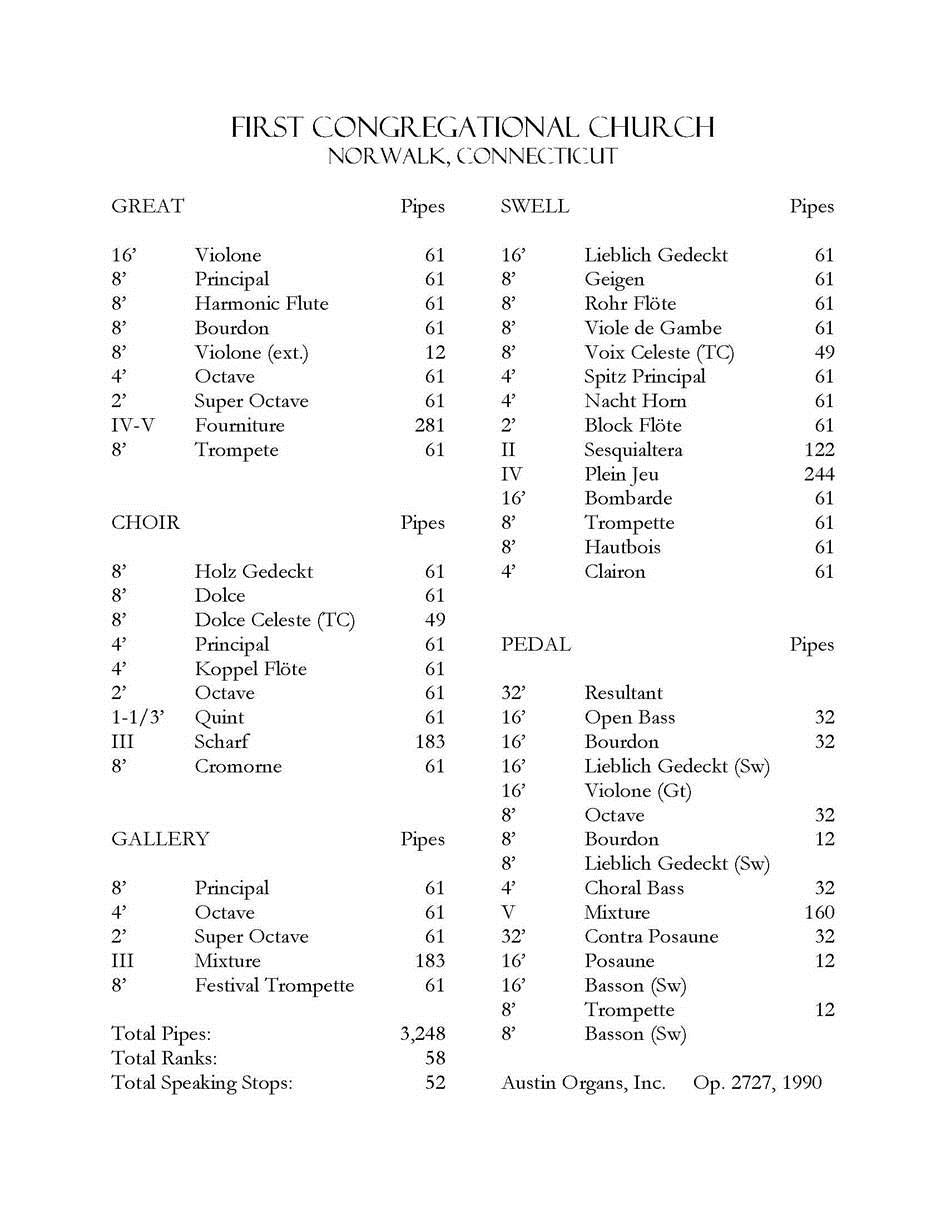