We are thrilled to have GBAGO scholarship winner David von Behren (Yale Masters of Organ Performance student and Organ Associate at Trinity Episcopal New Haven) join us for this wonderful year-end social gathering at the historic First Congregational Church, Fairfield - RSVP for scrumptious catered dinner to Carole Fanslow fanslow@juno.com by Monday, May 13.

The evening starts at 6:00 PM with a chance to coast into summer with fellow chapter members and their guests with wine and appetizers. A scrumptous catered dinner and dessert follows. The cost is $25 per person. RSVP to Carole Fanslow, fanslow@juno.com before Monday, May 14. Payment can be made by check to Greater Bridgeport AGO, or paid online at the website www.greaterbridgeportago.org. 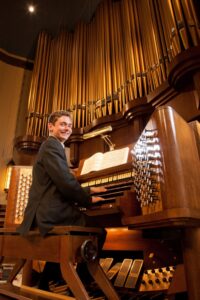 David von Behren, 23, is the first organist to receive the Cleveland Institute of Music’s prestigious Darius Milhaud Award, given each year to a student “who displays qualities of unusual talent and creativity, sensitivity, expressiveness, strong love for and dedication to the musical arts, outstanding musical accomplishment, and evidence of academic excellence.”David is pursuing his Master of Music degree at Yale University (School of Music/Institute of Sacred Music) studying organ Dr. Martin Jean and improvisation with Jeff Brillhart. Under the tutelage of Todd Wilson, David is a recent graduate of the Cleveland Institute of Music in Cleveland, Ohio, holding his Bachelor of Music degree in organ performance and music theory (double degree). Having performed with the CIM Orchestra at Kulas Hall and Severance Hall, David was recently named one of The Diapason’s “20 Under 30” Class of 2016, a group of young organists, organ builders, harpsichordists, and church musicians who show superior accomplishments, leadership, creativity, and innovative thinking.

David continues to concertize as a solo recitalist throughout the United States and Europe. In the past year, David was a featured solo performing artist at St. John the Divine (NYC), St. Thomas 5th Ave. (NYC), and Old West Church (Boston); this year, he will be performing solo recitals at Princeton University Chapel, Woolsey Hall (Yale University), St. George’s Windsor Chapel (London), and Clare College Chapel (Cambridge University) among other notable venues through the United States and United Kingdom. A native of Falls City, Nebraska David actively advocates for introducing and exciting younger audiences about classical music. In 2013, he began “The Little Stars Summer Program,” a music program for 3-11 year-old children in Falls City, in association with NPR’s From the Top and The Jack Kent Cooke Foundation. In June 2015, his music program won a one-year endorsement with the National Federation of Music Clubs. In Summer 2017, “The Little Stars Summer Music Program” will collaborate with OrgelKids USA, an educational pipe organ curriculum and kit created by Dutch organist Lydia Vroegindeweij.

As a violinist, David has performed in orchestra festivals at Carnegie Hall and the John F. Kennedy Center, and served on the executive committee of the Cleveland AGO Chapter. He has studied piano with Gerardo Teissioniere, voice with Dr. Mary Schiller, and violin with Stephen Sims. As the winner of the Jack Kent Cooke Young Artist Award on National Public Radio’s (NPR) From the Top, David’s radio performance reached over half a million listeners. He has also won the Tuesday Music Association Organ Competition in Akron, Ohio, the Henry Fusner Prize and Heinrich Scholarship for outstanding achievement in the CIM Organ Department, the M. Louise Miller National Organ Scholarship, the Peter B. Knock Organ Scholarship Competition, and the Ruth and Paul Manz Organ Scholarship Competition, and recently took first prize in the Regional Competition for Young Organists – Wichita, KS Chapter Competition. David holds the Colleague certificate of the American Guild of Organists and serves as an officer for the Great Lakes Region of the American Guild of Organists Young Organists (AGOYO) organization. In his spare time, he enjoys traveling and running half marathons costumed as various superheroes.